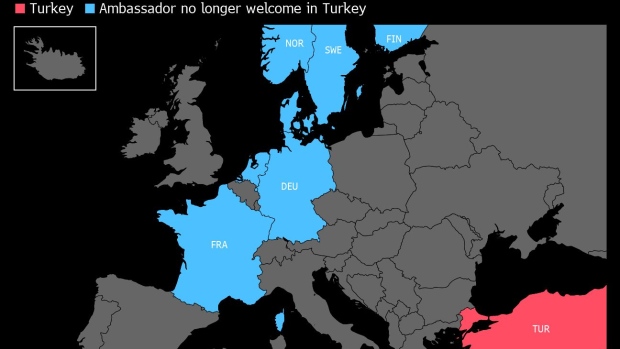 (Bloomberg) — Recep Tayyip Erdogan is leading Turkey toward the biggest showdown with key Western allies since the Turkish president assumed power two decades ago. At the heart of the row is a joint call by ambassadors from 10 countries — including the U.S. and Germany — on Turkey to free Osman Kavala, which Erdogan …

One idea I like is to use Europe’s own experience after World War II as inspiration. In the 1950s, old enemies France and Germany placed coal and steel — the industries of warfare — under a joint authority that guaranteed shared access and benefits. Out of this “Schuman plan” grew what is today the EU. And what coal and steel were then, oil and gas are now.

Something similar could work in the eastern Mediterranean, if only its ancient enemies could also rise above their feuding and grasp their responsibility to prevent war. With luck, Europe will transition from brown to green energy fast enough so that nobody will even need all that dirty stuff under the sparkling blue sea anyway.

(Bloomberg) — U.S. Secretary of State Michael R. Pompeo and his Greek counterpart Nikolaos Dendias reaffirmed their countries’ position that maritime borders should be settled peacefully and in accordance with international law, as Athens prepares for a new round of talks with Turkey on territorial disputes. The U.S. welcomes Greece’s readiness to engage with other …

Turkey condemned the U.S. for easing a decades-old arms embargo on Cyprus, saying the move could fuel already heightened tensions over territorial disputes in the energy-rich eastern Mediterranean. The Foreign Ministry urged Washington to reverse course, saying the decision “poisoned the atmosphere of peace and stability in the region and violated the spirit of the …